A Master And His Servant

There was a Bania named Dosabhai. Shriji Maharaj was once a guest of Dosabhai. Dosabhai affectionately served Maharaj. Maharaj said to Dosabhai, “What have you in your house? Bring out whatever wealth you have.” Dosabhai brought whatever money he had. He also brought gold ornaments. “Tie it in a bundle,” said Maharaj. Dosabhai tied a bundle. Maharaj said, “Put this bundle on your head and come with me.” Dosabhai did as he was told. Neither he nor his wife asked the reason for all this. They left the village and crossed the outskirts. At last they reached two miles away from the village. There was an unused well. “Throw the bundle in the well,” said Maharaj.

Dosabhai without any hesitation, threw the bundle into the well. Maharaj smiled and said, “Gone all your wealth into the well.” Dosabhai very calmly replied, “It was not my wealth, it was yours. It belonged to my master. I am only a servant of my master and must do as my master tells. You told me to tie it into a bundle, I tied it. You told me to throw the bundle into the well, I threw it into the well.” Maharaj smiled and said, “Dosabhai, go home, come here tomorrow and take out the bundle from the well.” “As my master commands,” said Dosabhai and returned home. On reaching home, he found another thing had taken place. Everything was lying helter skelter. Someone had broken open the boxes.

Dosabhai was very much surprised. His wife said, “The robbers raided our village after you had gone. Every house was robbed. They went away after robbing, cash, gold, ornaments and whatever they could. They also came to our house, ransacked all boxes, but they found nothing. How can they find? You, my dear husband had taken away all.” Now Dosabhai understood that Maharaj played this trick only to protect his wealth. The next day, Dosabhai went to the well and brought out his bundle of wealth. Such was Shriji Maharaj. Whosoever surrenders himself completely to Maharaj, he has nothing to worry about. 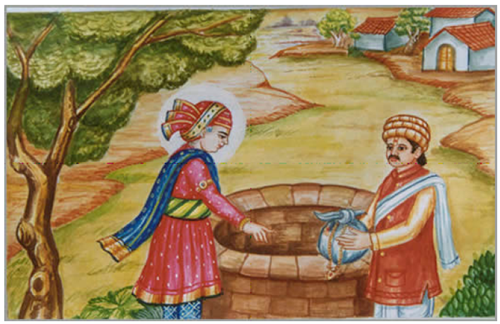