Sabarkantha District has given us two great saints:- Swami Gopalananda and Swami Vasudevananda. The son of a Brahmin of Malpur village of Modasa went outside for the studies of religion. Once he returned to Jetalpur with his Guru (Master). Shriji Maharaj was at Jetalpur at that time. On having Maharaja's Darshan, the boy lost his consciousness. He fell at Maharaja's feet and said,“ I want to be your sadhu ”. Maharaj smiled. He looked at the boy and said, “Oh! at last you have come”. The boy permanently settled there with Maharaj. Maharaj initiated him. He was named as Gopalanada Swami. The new sadhu started his studies at the feet of Swami Muktananda. He was so intelligent that whatever was taught to him was easily grasped by the boy. He could easily grasp the deepest meaning. To understand the deep and incomprehensible matters of religion is not so easy. For this young new sadhu it was like berry in the palm of the hand. He could clearly and easily see the meaning. On seeing this, Muktanand Swami's joy flew no bounds. He expressed his joy before Maharaj. “Maharaj this new young sadhu is a miraculous figure”.

“He has come here on the earth to perform great deeds”, said Maharaj. Once Maharaj was putting up at Loya village. He was holding a meeting of saints and devotees. Suddenly Maharaj said, “ The new young sadhu will read KATHA today”. The new young sadhu was Gopalananda. He was small not only in rank, but he was also small in size. He was dwarfish. He could not even be seen if delivered lectures sitting on the ground, so Maharaj commanded him to stand up and deliver religious lectures.

The conference (gathering) contained very big saints. Not only that but Maharaj himself was present in the meeting. So the young sadhu was a little hesitated. So throwing away his shyness, he started the lecture. Gradually the pitch of his voice rose, the meeting derived pleasure and in a short time everyone was spell-bound.

The Katha was over. Maharaj was all praise for the young sadhu. He lifted up the young sadhu and sat him near himself on the wooden cot. Then taking away his upper cloth - Anga Vastram - wrapped it on the young sadhu. Maharaj put a sandal-wood paste mark (CHANDAN TILAK) on his forehead. Not only that but Maharaj himself also waived lamps before him by way of worship or to honour him (Arti). Maharaj washed his feet with water, and that holy water was distributed among the saints as offerings. Then Maharaj addressed the gathering, “Don't under-estimate this young sadhu. Please understand the under-lying meaning why I Seated him on the `Gadhi' today. Honour himself by standing up while he enters the meeting. Touch his feet. He is vasudev incarnate. Therefore I rename him as Vasudevananda”.

All members of the meeting were highly pleased. From that moment onward he was famous as Vasudevananda. Maharaj praised his greatness in the meeting in so grand a way that Vasudevananda was a little shy. He, after leaving the meeting , went to his seat and sobbed much. He began to wail “Honour and respect should be paid to Maharaj, not to me. Maharaja's holy feet should be touched washed with water and should be taken as offering, not mine. On the contrary, Maharaj did all this for me, he worshipped me, touched my feet, and took the holy water as offering after washing my feet. I have become a sinner”.

Mulji, a Brahmachari (a celibate), informed Maharaj about the wailing of Vasudevanada. Maharaj sent Muktananda Swami to him. Muktananda Swami was considered an expect in persuading people. He said “O Brahmachari, Maharaj is just like our parents. Parents feed the son, they give him dress to wear, they take him in their lap and they sometimes give undue importance to him. Hence, the boy is not at fault. We must be happy in what Maharaj is happy”.

Swami Vasudevananda was now calm. Swami was a great scholar. He had an extraordinary command over sanskrit language. Once Maharaj told him “Shatanandamuni wrote “Satsangi Jeevan”, you also write similar type of volume”. Swami Vasudevananda obeyed Maharaja's command. He wrote a volume named as “SATSANGHI BHUSHAN”. The whole volume is full of devotion. He was beautifully described numerous acts -”LEELA” of Maharaj in that volume. Swami. many a time, paused while writing this volume. At that time, all his disciples would ask for the reason of pause. He would answer, “I write as Maharaj dictates me. This is done not by my wish”. On reading “SATSANGHI BHUSHAN”, a scholar has written a commentary on it. There the scholar has gone to that extreme in saying “No doubt, Swaminarayan is undoubtedly is God. But I believe the writer of this volume as my God ”. As Bhagwan Vyas is the author of the Mahabharat, similarly Vasudevananda is the author of the “SATSANGHI BHUSHAN”. Vasudevananda died in Ahmedabad. He was cremated at the Narayan Ghat on the banks of the river Sabarmati. His memorial still stands there. 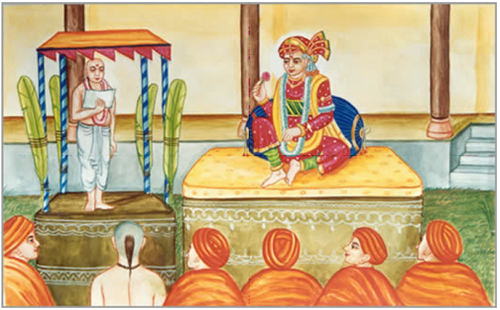