God In The Garb Of Sadhu

There was a small village named Devli. The king of Devli was suffering from a dreadful disease. Many drugs were applied to him, but in vain. Then the doctors said to the king, “There is God in garb. You can just try with some saints. He will recover you from the disease. “Go and find out a saint who comes to my city and produce him before me,” ordered the king. When the king finds a saint he will order him to recover him from the illness, or to go to prison. Thus many Sadhus and saints were imprisoned by the king. Thus it went on, once Nilkantha Varni all of a sudden arrived in this city. The king said, “There is God in the garb of a Sadhu. So you must recover me from the illness, or go to prison,” Nilkantha Varni said, “Oh king, you should talk to a Sadhu in the befitting manners of Sadhu, not by an order.”

The king was astonished to hear this. No Sadhu before this had told the king such words face to face. All sadhus were dumb founded before the king's order and were sent behind the bars. Varni continued, “O king, if I take some intoxicating drug, who will be influenced by it ? Myself or others ? If I dash my head against the wall, whose head will be hit ? Mine or someone else's ?” The king, with fear said, “I will be the suffer,” Varni replied, “ Similar is the case with this disease. We have to suffer our own doings. Everyone gets happiness or sorrow according to his doings [Karma].

Your good deeds gave you the throne. Your misdeeds gave you the disease. Happiness gives us joy and when sorrows come, we start slandering God. At the time of sorrows, we begin to inflict upon ourselves to bring round God saying, “Cure my disease or I will stab myself,” such things should not be told to God. If you do believe in God in Grab of a Sadhu, you should not order the Sadhu wearing the garb to cure your decease or go to jail. Sorrows will not go away by inflecting punishment upon them or humiliating them or threatening them. On the contrary sorrow will increase. Do you follow what I say? Now the king began to follow what Varni told. The king said, “I follow what you say.”

“If you follow what I say, honourably free all the Saints you have imprisoned,” said Varni. “I will free them all instantly and will fall at their feet to beg their pardon anything else ?,” replied the king. “Now, the first is service unto the Saints, then the prayer to God is impotent. He is capable of doing and undoing anything. Saints will be pleased with you and bless you. And on seeing the pleasure of Saints, God will make you happy,” said Varni. The very moment he freed all the Saints he had imprisoned and with tears in his eyes and with folding hands, the king sought pardon from those Saints. Saints are the incarnations of forgiveness. They pardoned the king, blessed the king heartily. After the departure of the Saints, the king said to Varni, “Varniji, you have shown much mercy to me, show mercy more.” “Ask What do you want?” Said Varni, “Do you want to be cured of this disease?” “No, I have left it to God. God pleased with me and gave this throne. Similarly He gave me this disease. I don't want to over look His wish,” said the king. “Then what do you want, O king ?” asked Varni. “I want the nectar of your feet,” [CHARANAMRIT] said the king with folded hands. Varni threw a sweet and kind smile The king had the nectar of Varni's feet. He put it on his head and drank some proportion. An unexpected miracle occured, The king's disease disappeared. He was cured as he was softened with devotion. He fell at the feet of Varni and said, “The story of God in the Garb of Sadhu has proved true, I consider you my GURU. Please stay here.” Varni said to the king, “I haven't come here to be your GURU. I have many things yet to finish.” Saying this, Varni started off.

We should serve the saints without any desire of rewards. [The Saints should be served selflessly.] And Saints blessings give us unexpected happiness. This is taught by the lesson. 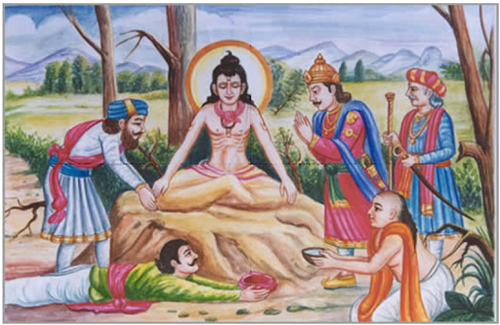