Saints In Maharaj And Maharaj In Saints

Once Shriji Maharaj was in Kutch. He was moving along with his saints from village to village. It was summer. It was scorching heat. The earth was hot. Maharaj was going on with his sadhus. Maharaj had `mojdi's (shoes) on his feet. But the saints were bare footed. They were walking on the ground as if they were walking on burning coals. But not a word of dissatisfaction came from their mouth.

There appeared a beggar, slowly plodding his way from the front. He was also barefooted. Maharaj stopped him and gave away his own shoes to this beggar. “What have you done? said the saints to Maharaj. “My saints have been walking barefooted, why then should not I have the pleasure of walking barefooted,” replied Maharaj smilingly.

“Your feet will be burnt and there will be blisters on your feet,” said the saints. Maharaj smiled again and said, “Even otherwise there are blisters.” “Suffering of saints is my suffering!” When saints have blisters, I also have blisters.” “When saints are beaten, I too have the marks of whipping.” It was really true. Many had witnessed such examples. In the scorching heat of the sun, saints/sadhus used to go to beg barefooted in Ahmedabad. There were blisters on their feet, and toe! There were blisters on Maharaja's feet, even though Maharaj would be far away, say five hundred miles away! The reason? Maharaj was in saints, and saints were in Maharaj.

Shriji Maharaj has often declared: “Service done to my sadhu's is service done to me.” “Their suffering is my suffering.” Why, then, Maharaj arranged to involve his saints in suffering? The answer is that Maharaj was preparing for that great work. 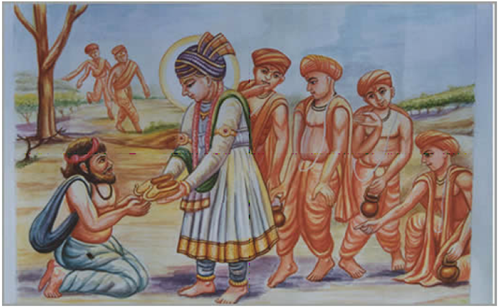