A carpenter named Lalji lived in Shekhpat of Jamnagar District. He was a good carpenter. His mind was towards God. So he continuously thought about God while at work. He did customers' work considering it as God's work. Customer's work, as a result, was very nicely done. This Laljee had a friend named Muljee Sharma. Mr Sharma lived three miles away from Rokhpat. When they met, they used to talk about God and His Leela. Time passed. Now the situation was such that when they do not meet, they would, and particularly Laljee, felt very much. So Laljee would go on feet to Bhadara and both of them would be so much absorbed in God's talks that they would forget when night passed over. Laljee would return early in the morning and would start his day's work.

Only that person knows about God, who is wholly devoted to him. Day by day, Laljee lost interest in worldly matters, but he dragged it disinterestedly. At that time, he had Shriji Maharaj's Darshan every particle of his body drew towards Maharaj once, Maharaj came to Shekhpat. He wanted to go to kutch. Laljee was married in Kutch and so he went to Kutch often. Therefore Maharaj asked him, “you are known to the way to Bhuj. Would like to accompany me?” Laljee had a special attraction towards Maharaj and moreover this was an invitation enough to boost his enthusiasm. So Laljee readily agreed to the proposal and started for Bhuj. It was naturally a long route. The way was through the desert. Laljee kept SUKHADI (Sweet prepared by mixing three ingredients - ghee, gue and wheat flour) with him and a water bottle also. He kept some rupees hidden in his boots, necessity arises. Maharaj walked barefooted. Both of them started through a desert. A beggar met them on the way. He showed his empty stomach and said, “I am dying of hunger. Give me something to eat”.

“Laljee, give him something to eat,” said Maharaj. Laljee gave him some SUKHADI. Maharaj said, “Why so little SUKHADI? Give him all that you”. Laljee gave all that he had. The beggar ate away all. Then he asked for water. Laljee offered him the bottle. The beggar drank it all. Maharaj and Laljee started ahead. There they met thieves on the way. They said, “Give all that you have”. The thieves searched Maharaj and Laljee, but the thieves found nothing. “Alas!” said the thieves and were about to go when Maharaj said, “You have searched our pockets but why haven't you searched our shoes ?” The thieves searched Laljee's shoes and took away the rupees hidden in the shoes. Laljee was astonished, “How did Maharaj come to know that I had some rupees kept hidden in my shoes ? I never told him about it”.

Thus everything was gone, food, water and money. These are the bare necessity in the life of man. All these three requirements were thus gone. Now God was the only hope for them. The wealth hidden in the shoes/under the feet was gone, means evil effects of Saturn (PANOTI) also gone! The feeling for accepting or accumulating wealth (PARIGRAH) was gone, and so the mind was peaceful. Both of them, Shriji Maharaj and Laljee, were marching ahead. Laljee was thirsty. He said, “Maharaj, I am dying of thirst. What can I do ?” Look there. Water is seen there. Go and quench your thirst, “said Maharaj. “Its salty water everywhere. How can I drink it ?” said Laljee. “Thus in the hollows of your palms”, demonstrated Maharaj. Laljee saw the wonderful smile of Maharaj. He had now wonderful self-confidence. Laljee went to the water, filled both his hollows of his palms and drank. The water was not salty at all. It was wonderfully sweet. Thus they reached the outskirts of a village named Aadhoi. There they encamped under a bunyan tree. Maharaj walked bare-footed so many thorns stuck into Maharaj's foot sole. “Laljee Bhagat ! would you please pull out thorns from my feet? said Maharaj.

Laljee took Maharaj's feet on his knees, washed it, cleaned it and began to pull out thorns one by one. While cleaning Maharaj's feet, Laljee saw an object of curiosity. There were divine symbols in Maharaj's feet ! He remembered what he had read somewhere.“God incarnate have these divine symbols”. He decided firmly in his mind, “Now I am never going to leave this company,” He bowed down to him. Maharaj said, “Bhagat! Go to village and bring some food to eat. I am very hungry. “I had taken with me some food to eat that you gave away to a beggar, you allowed the robber to rob me off the money which I had. What can I do now ?” asked Laljee. “Beg and bring it here” Said Maharaj. “Begging?” Surprised Laljee and said, “Maharaj, this is the place where my father-in-law lives. My wife is also here. How can I beg here? How bad it would look if people recognised me?” said Laljee. “Are you prepared to go if I make a plan where you will not be recognised? I know how to perform that miracle,” asked Maharaj. “Then, this servant of yours is ready to go”, quickly said Laljee.

Maharaj suddenly drew out an Ochre coloured piece of cloth. He made Laljee to wear the Ochre-dress of a Sadhu. Then Maharaj sent him for begging. Laljee first of all went to his father-in-law's house for begging. His wife gave him fresh loaves. Laljee brought that he begged and placed it before Maharaj. Maharaj, while eating the food said to Laljee, “Now remove your disguise”. “Disguise!” hearing the word Laljee was startled. He said to himself, “What? Is this a disguise? Am I a disguised Sadhu? People will defame me. With it Maharaj will also be defamed that Maharaj's Sadhus are disguised Sadhu not real ones”. He immediately determined and said, “Maharaj, I won't remove this disguise now. That has been akin to skin”.“People will defame you,” said Maharaj “How can I let go my well being on the fear of people's libel ?” said Laljee “Not only your well being, but in your well being lies the well being of numerous lives”, said Maharaj.

Laljee bowed his head at the feet of Maharaj. At the same moment Maharaj initiated him as a Sadhu. He gave him a new name of Nishkulanand. Nishkulanand means one who has renounced his family, one who has no family. At that time the Swami was forty one. Swami's renunciation and devotion are wonderful. He has composed many songs on renunciation and asceticism. He had the strength of renunciation and asceticism in him. He had two sons. The elder one Madhavjee was of seventeen years. Once he came to Ghadhada for Maharaj's Darshan. His mother had sent him with special instruction that because of celebration his father might have come there and that he should fall at his father's feet.

Madhavjee came to Gadhada and stayed there for a month. During that time, he had an opportunity to see Nishkulananda. He bowed down to him and sat in front of him. Swami asked Madhavjee as he used to ask anyone, “How long are you going to stay here ?” “I am merely a guest of Gadhada. So how long can I stay here ? Perhaps at least a month”, answered Madhavjee. “True, it is also true about this world. We are the foreigner in this world, a guest. How long one stay. All is like a caravansary, an inn. Man is born and lives but how long can he live ? He will have to go one day. All is just like ciphers without a digit 1. The digit `1' means God, and ciphers means wealth, property, honour and position. We have got or may get birth of man. What happens if PARASMANI happens to fall into hands of a monkey ? A monkey will throw it away after smelling it. Similarly a foolish man who chances upon a human with which is like a PARASMANI throws it away. And then he cries. Hence if this fact suits you well, O people of the world, worship Almighty.

Swami's words were darting out like the arrows from Arjuna's bow, and they were piercing Madhavjee. Madhavjee at last was pierced. he went to Gopalanand Swami and said,” Swamiji, I want to be a Sadhu. Kindly initiate me”. Gopalanand Swami initiated him as a Sadhu. He gave him a name of Govindanand to worship Govind. He brought him to Maharaj. Maharaj was pleased and said, “Like father, like child. The lion's cubs turn out to be Lions”.

Nishkulanand sings in a song. “All honour to the mother, long live the mother, who inspired her son for renunciation, taught him the gospel of life, and the son found this world a place of fire - oven!”. Nishkulanand was not a bawa who converted others sons to a sainthood. He was a true saint, PARAMHANSA. His words and behaviour were identical. Hence, his teachings had immediate effect.

Nishkulanand has a firm faith in the divine incarnation of Shriji Maharaj. This faith is found everywhere in his poems. Swamji says that total surrender to Shriji Maharaj is just like receiving the cash hand to hand. Here there is no chance of credit. As soon as you have Shriji's Darshan, you will have the addiction of devotion. What else remains when God (Omnipresent) is always present before you?

Swami has not dedicated only poems to Shriji. He has presented all his art at the feet of Shriji. He has swung Shriji in HINDOLA artistically prepared by himself. He has poured his soul in the artistic wooden carvings of temples. The art that he poured in Dholera temple is unique. He passed away in the same temple of Dholera and that to by informing the people well in advance that “I am leaving this world. Shriji has come to take me away”. Such a perfect man was Swami Nishkulanandaji.

There were many bright jewels shining in the court of Shriji, such as, Muktanand, Gopalanand, Brahmanand, Premanand, Shookanand, Shatanand, Vasudevanand etc. Swami Nishkulanand is one of the unique Gems.

Teacher should show BHAKTA CHINTA MANI volume to students. He should read an episode from it. He should narrate the story of Gopichand and his mother.

Shriji Maharaj's former Sadhus have `Aanand' at the end of their names. Therefore they are called NANDA SAINTS. Whosoever craves for God and Surrenders himself to Shriji and if Shriji is sure about, he would be initiated in Shriji's Sadhus. He may be of any caste or colour. The caste of all devotees of God is only one. This was the cause of new enthusiasm among people. People had now new hopes. What else do they want, people thought, when they could get God KESHAV directly?

Laljee's friend Muljee also became a monk of Shriji. He is known by Gunatitanand. 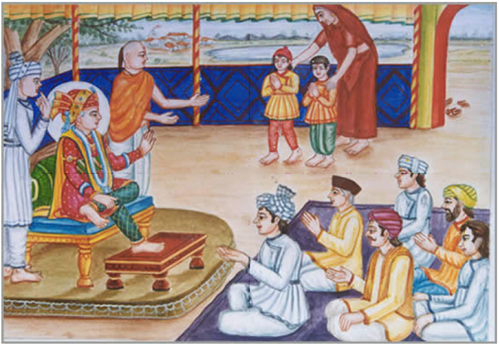